I often have parents attend my classes , having their second or even third baby.

While you might think Hypnobirthing is only for first time parents , in fact repeat parents recognise how the lack of knowledge about birth and what to expect , often leaves them a bit shell shocked . Second time around they know what they didn’t know first time around .

Second time parents have often experienced the feeling that there should be more tools shared with them about how their body works , how their own hormones can help , what partners can do .

This couple attended my classes a couple of months ago and dedicated time to practising the tools . 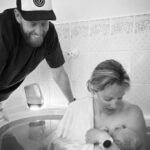