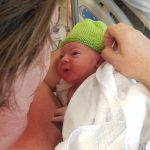 My last email to you we were 40 +9 and facing likely induction. We were going to push out induction date out until 40+12 falling on a Wednesday. Tuesday we were booked in for routine ultrasound and CTG. Those last few days of pregnancy were filled with much anxiety and worry for me lots of sleepless nights and worry. I awoke on Tuesday morning and noticed that bubs wasn’t moving as much as he normally would. Then I couldn’t feel him move at all despite all my efforts, I woke Eamonn up and we rushed in the womens assessment (we were not mucking around). By the time we got there I felt moveemtn but it still wasn’t much.

I was connected to the CTG and everything seemed fine until bubs heart rate dropped to around 60-70 and stayed there. I was a code blue and next minute I had about 10 people in the room carrying out multiple jobs, it was pretty scary. I kept thinking that I was going to have an emergency C section but thankfully his heart rate slowly started to climb. I was taken to delivery suite and had my waters broken not long after that. I was ready for the sintocin also as I knew that it was highly likely I would need it. Little did I know that my labour would go from 0 to 100 within 4 hours no sintocin needed.

Within 30 minutes of having my waters broken I had to really focus and breathing through the surges. We used massage and heat packs to get through the surges and I found that vocalizing using earthy moaning sounds really helped me. I was constantly monitored due to the fetal bradycardia picked up on the CTG. I also was unable to eat (I hadn’t had anything all day so running on empty) it was probably a good thing as I had a lot of nausea and dryretching at times. The bath was still on the cards as it was portable monitoring but I was advised not to go in too early as it could stall the labour. We attempted the shower instead but as I sat on the chair baby’s heart rate dropped so back on the bed it was. This happened on and off during the labour. I reached a point where I started to panick it was all so intense and there was little rest between surges. My midwife suggested the gas but I declined as I though I still had hours to go. The next surge, I had an intense urge to push I was fully dialated. I felt most comfortable sitting over the toilet but unfortunaly bugs didnt care for that and again his heart rate dropped. He became very distressed and I knew at that point I would need medical intervention.

I had a forceps delivery and an episiotomy. The team were amazing and I felt in such good hands. The consultant explained everything to me in such a calm manner and answered all my questions. I was completely accepting of what was happeneing, I just wanted my baby to be safely delivered. He was very flat when he came out but he was still placed on my chest before he was whisked away to help him with his breathing. It wasn’t long before he was brought back to me completely alert and absolutely perfect, it was the most incredible moment of my life. I felt amazing like superwoman and I was so incredibly proud of what I had achieved.

I didn’t exactly look like a calm hypnobithing woman like seen on many of the videos. I was very vocal and constantly moving around. I had surge of the sea playing and that helped me to refocus between surges. Although we didn’t use any of the scripts as we had planned to, I believe that I am able to positively reflect on my birth thanks to hypnobitrhing. What I loved most was that I had absolutely no fear of birthing my baby. I was so ready and actually excited when it was all happening. I listened to my affirmations daily and I loved listening to my tracks whilst relaxing in the bath during pregnancy. I would have never though it possible to birth my baby without any pain relief until I did the hypnobirthing course. It helped me to feel so empowered and completely ready for birth. I am so grateful that I had prepared my mind and body for birth as I can look back on it now as the most incredible experience of my life.

Thanks so much Kate, Ill be recommending hypnobirthing to everyone I know.